A lot of lectures were showed in three different rooms: white, jellow and green.

The production of meat for hectar is higher than the one coming from bovine.

Limitations are the low population, the limited knowledge, the preference for beef by the consumer. After Dr. Zava, Prof. Antonio Borghese presented his lecture with title: Planetary Impacts of Dairy Buffalo. He showed the buffalo population trend linked  to dairy buffaloes in all the continents.

He spoked on the economy from Dairy Buffalo in Italy and in the principal countries of Asia and America, describing the dairy products and the market. Finally he underlines the importance of the udder and teats anatomy and conformation, the adaptation to milking machines and to automatic milking systems, as   to select female lines without problems of milk ejection and with short times and more efficiency in milk yield, to increase milk availability, to satisfy the requirements of animal proteins of high biological value, that are a must for the children growth and for the priority economy of many countries.

In the afternoon André Mendes Jorge spoked on the Production and Meat quality of water buffaloes, presenting the Brazilian project of UNESP, Botucatu in the first year of activity on the meat production, studying also the carcass composition and meat quality. Carlos Armando Cadoppi from Argentina too spoked about buffalo meat. Prof. Luigi Zicarelli from Italy presented the lecture: Nutrition and environment in buffalo production. He underlined the problems of pollution  by CO2 and by methane, that are produced in small quantity by ruminants, in great quantity by combustion of fossil carbon and petrol, contesting some groups who look at the ruminants as the responsible of the world pollution, and remembering the importance of proteins of animal origin and of vitamin B12 in the human nutrition.

At 6 p.m. there was the meeting with the Authorities from Ministry of Agriculture and Rural Development of Colombia, with Ricardo Sanchez, President of the Breeders Association and Claudia Roldan, president of IBF and of the Colombia Buffalo Association (Asobufalos). The Ministry said that the buffalo population in Colombia increased until 450,000 animals, bovine are 23 million, and a program of animal curing for tuberculosis and brucellosis was financed.

In the night a welcome cocktail was offered, with typical meals, music and dance.

The day after, November 24,  in the Green room, John Williams presented the lecture on the buffalo genome and the genetic control of a complex phenotype.  The genotyping was effected on different breeds, Mediterranean Italian, Nili Ravi, Murrah, Jaffarabadi. In chromosome 11 was discovered  gene regulating early lactation and lipid metabolism and in chromosome 19 genes acting on metabolism of steroid hormones. In the same time in the white room there was the reproduction session with interesting lectures on technologies and on embryo production by Dr. Gianluca Neglia (Italy) and by Prof. Pietro Baruselli (Brazil). Dr. Neglia showed also interesting links among nutritional factors and reproduction efficiency. Prof. Baruselli presented a program with Brazilian and Italian University to increase the embryo collecting, via OPU and IVF, utilizing also somatotropin hormone.

In the night there was a dinner party on Cartagena castle with panorama on the port.

The day after, November 25, started at 8.00 with the IBF Assembly, directed by the President Claudia Roldan and by the General Secretary Prof. Antonio Borghese. The first point was the election of the IBF President 2016/2019. The Secretary called each IBF member who voted by secret ballot. Dr. Inderjeet Singh for India received 20 votes. Prof. Ihsan Soysal for Turkey received 25 votes. Therefore the IBF President now is Prof. Soysal, who will organize the next World Buffalo Congress in Turkey on 2019. Dr. Inderjeet Singh, as president of Asian Buffalo Association, will organize the Asian Buffalo Congress on 2018 in India. After the Secretary presented the activities of the IBF Secretariat, composed by 11 people, particularly the third IBF Training Course, that will be held from 9 to 19 of May 2017 in Italy.

In the afternoon the 11th World Buffalo Congress was officially closed by Claudia Roldan, who presented the new President Prof. Ihsan Soysal to the people.

On November 27 started the Buffalo Tour from Cartagena. The first stop was in OLEOFLORES Company in Barranquilla, producing palm oil. The farm extension is 700 ha, 350 utilized by palms, the Company has 15,000 ha in total. The palm oil is used to fry food, to produce margarine, and also as fuel. The palm produce oil for 30 years. The buffalo is used in the farm as draft animal. In the afternoon people arrived in FORTALEZA farm, property of Claudia Roldan, near Monteria, where Murrah buffaloes were shown under a violent equatorial raining. The farm surface is 315 ha with Brachiaria pasture. The average milk production per day is 5 liters, sell at 1600 pesos/liter, about half dollar. Sanitary treatments are vermifuge (Levamisol, Fenbendazol) and vaccines against brucellosis, clostridiosis, foot and mouth disease.   After a rich dinner was offered, with music and dance.

The day after, November 28,  from the Hotel in Monteria the people arrived to MONTERRICO farm in Monteria, a farm for animal fattening and dairy purpose, with Pure Brahman and with Murrah buffaloes. The second step was the HACIENDA PRAGA in Pueblo Nuevo, Cordoba, Inversiones COLBUFALOS S.A.S., property of Juan Angel: in the farm of 10,000 ha there are 2400 buffaoes of Mediterranean Italian breed, producing an average of 6 liters milk per day, 3.5% protein and 7% fat, milked in mechanized barns with tandem system, fed only pasture with integration of maize silage during the dry season (December). 2000 doses of semen Mediterranean Italian per year were imported. The calves are fed by  females,  4 calves for female, and after by reconstituted milk, with weaning at 3/4 months. In the farm a rich lunch with good meat was offered. In the afternoon people was carried to the Hotel Monteria.

The day after, November 29, we were carried to Cheese Industry PLANTA DE LACTEOS, PLANETA RICA, Cordoba, where  mozzarella cheese is produced in sterilized system, with shelf life of one month, plus burrata, ricotta, yogurt. The second step was the farm EL DIAMANTE, La Apartada, Cordoba, where 1,800 buffaloes Murrah are bred, fed pasture and producing about 3 liters per day. The climate is 38 grade centigrade with 90% humidity and 1860 mm rain per year. After the lunch we went to the farm EL TEATRO, that is part of a Cooperative constituted by 9 farms in Cordova and Antiochia, who produces coffee and replaced 14,000 zebu Brahman with 13,400 Murrah buffaloes because of the earlier puberty, the higher fertility, the higher longevity, the shorter inter calving interval, the reduced mortality. Buffaloes do not loose weight during dry season  and growth is normally 28%, according the studies of Alcide Ramorin.

Finally the buffalo tour was ended with a final dinner in the Hotel Monteria. 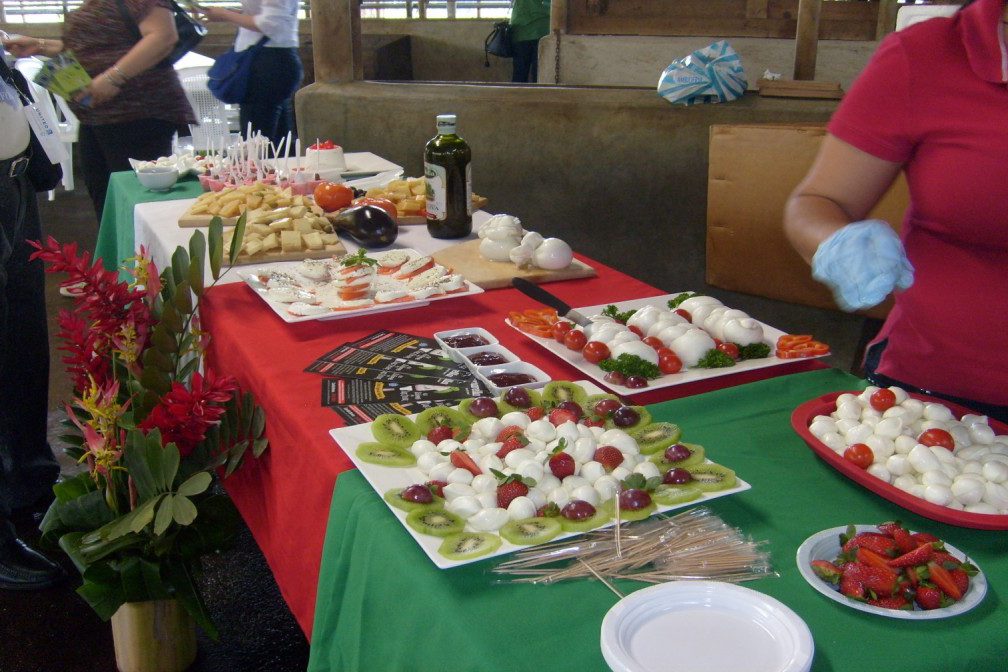 8th Buffalo Symposium of the Americas and Europe 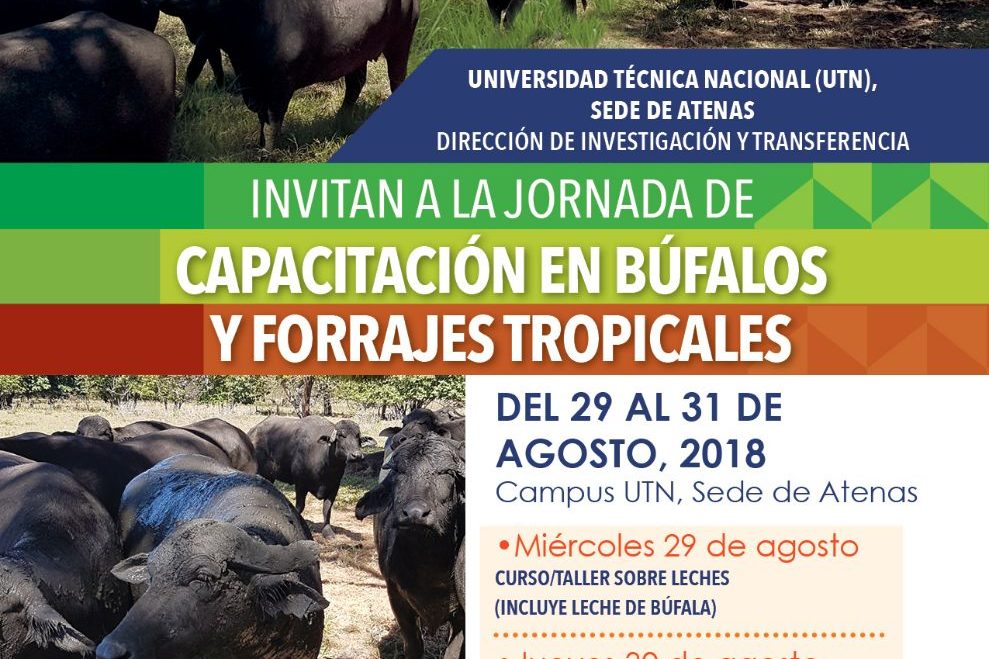